March 27, 2012
After a long break, a new version of WWWJDIC for Android is available on the Android Market Google Play. The new release comes with a new UI and a fresh set of icons, support for more dictionaries and widget improvements. It also marks 2 years since the first public release (0.1).

Once again, WWWJDIC makes use of the excellent ActionBarSherlock library to make app features more accessible and easier to use. ActionBarSherlock 4.0, based on Ice Cream Sandwich (ICS) source code, backports all features of the action bar found in Android 4.0 to Android 2.x and 3.x devices. Of those, the one most prominently used in WWWJDIC is the split action bar. Android's action bar can host multiple action buttons to let users easily access app features, but on handset screens the number of buttons is limited to 2 or at most 3, in order to leave some space for the activity icon and title. Actions that don't fit in the action bar are by default moved into the overflow menu. Since they are hidden, it's harder for new users to find them, and some app features may go undiscovered for quite a while. The solution to this problem, introduced in ICS, is the split action bar. An app configured to use it will display actions in the top action bar when space is available (in landscape mode and/or on tablets), but show a secondary action bar at the bottom of the screen when running on a narrow-screen device. Since the app icon and title are displayed at the top, all space can be dedicated to action buttons (usually up to 5). Most WWWJDIC screens now make use of the split action bar, and some features originally accessible via inline buttons have been moved to the bottom bar. Here's how the main screen looks like now: 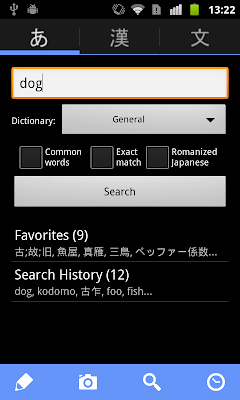 All major app features (handwriting recognition, OCR, multi-radical search and favorites/history) now have their own icon in the bottom bar (new icons created with Android Asset Studio). This  makes app features easier to discover for new users and provides a consistent look across the whole app. The main  action bar (with home icon and app title) has been removed to make sure all features are accessible without scrolling even on devices with small screens. You can switch between the dictionary, kanji and example search modes as before: by selecting the appropriate tab or swiping left or right. 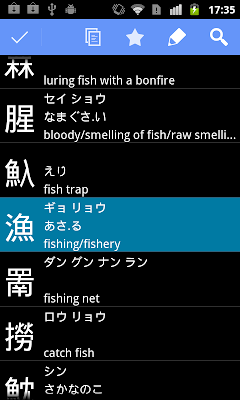 Native Android sharing has been added to all details screens, so you can now send the dictionary entry, kanji or example sentence you are viewing to any Android app that accepts plain text simply by pressing the share button. Copying to the clipboard is available as before, but has a new icon (the middle on in the screenshot below). Note that details screens are using the split action bar now, and some inline buttons have been moved there: the kanji stroke order button bellow, as well as the example search button, previously displayed on the dictionary details screen. 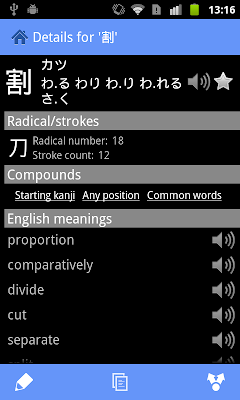 The stroke order diagram backend, running on Google App Engine, has been migrated to the High Replication Datastore. This should result in faster stroke order display time and less errors/downtime. Additionally, the backend is now a paid app with additional quota to let it handle traffic spikes and assure faster response time. Supporting the app is still relatively cheap, but not completely free, so buying the donate version is appreciated.

The kanji of the day widget also gets a few improvements in 2.2 (along with a pesky details layout bug, already fixed in 2.2.2). In addition to the previous random selection mode, there is now a sequential display mode as well. If you select it in the configuration screen, the kanji of the day will be displayed in a predictable order: either  JIS Level 1/2 order or as defined in the JLPT kanji lists for each level. The widget configuration screen has been added to Settings, so now you can change how the widget is displayed without having to remove and re-add it (only enabled if there is at least one widget on the home screen). Less visible, but important for people trying to squeeze the best performance out of their devices, is how network connectivity changes are handled. In previous versions, WWWJDIC would receive a network change notification (connected to WiFi, offline, etc.) and try to update the widget if the previous update failed due to lack of Internet access. The check would be performed even if you were not using the widget, causing a new WWWJDIC process to be created (if not already running) for each check. As of 2.2, the app only registers itself for network notifications if you have at least one widget installed. That should save a few CPU cycles for people not currently using the kanji of the day widget.

Last but not least, WWWJDIC (the site) introduced support for a Japanese-Italian dictionary in February. The Android app now supports Italian (text-to-speech also available) as well, and can access some of the less known WWWJDIC dictionaries: Japanese WordNet, Combined English-Japanese as well as the Work-in-progress dictionary.

Finally, a short statistical recap to mark the app's second birthday: 86 thousand total downloads, 40 thousand of which are active users. 70% of users are in Japan, followed by the US with 12%, then Germany, Australia, the United Kingdom and France with 1-2%. The most popular devices are Toshiba Regza, Samsung Galaxy S2 and the original Galaxy S. There is still some way to go until 100K downloads, so if you are not already using the app get it now and help it join the 100K club!
wwwjdic

One of the new features Android M introduces is adoptable storage. This feature allows external storage devices such as SD cards or USB drives to be 'adopted' and used in the same manner as internal storage. What this means in practice is that both apps and their private data can be moved to the adopted storage device. In other words, this is another take on everyone's (except for widget authors...) favorite 2010 feature -- AppsOnSD. There are, of course, a few differences, the major one being that while AppsOnSD (just like app Android 4.1 app encryption) creates per-app encrypted containers, adoptable storage encrypts the whole device. This short post will look at how adoptable storage encryption is implemented, and show how to decrypt and use adopted drives on any Linux machine.
Adopting an USB driveIn order to enable adoptable storage for devices connected via USB you need to execute the following command in the Android shell (presumably, this is not needed if your devic…
Read more

One of the less known new features introduced in ICS is the ability to backup a device to a file on your computer via USB. All you have to do is enable USB debugging, connect your phone to a computer and type the adb backup command in a shell. That will show a confirmation dialog on the phone prompting you to authorize the backup and optionally specify a backup encryption password. It looks something like this:


This doesn't require rooting your phone and lets you backup application data, both user installed and system applications (APK's), as well as shared storage (SD card) contents. There are some limitations though: it won't backup apps that have explicitly forbidden backups in their manifest, it won't backup protected (with DRM) apps and it won't backup some system settings such as APN's and WiFi access points. The transfer speed is limited by ADB channel speed (less than 1MB/s), so full backups can take quite some time. There is also a rather annoying bug …
Read more 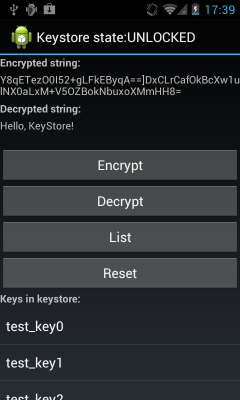 This article describes how to talk to the system keystore daemon directly and store app-specific secrets in the system credential storage. It will introduce private API's, not available via the Android SDK and some OS services implementation details. Those may change at any time, and are not guaranteed to work. While the techniques described have been tested on a few different devices and OS versions (2.1 to 4.0), there are no guarantees. Use caution if you decide to implement them in a production app.
As described in previousarticles, Android has had a system-level credential storage since Donut (1.6). Up until ICS (4.0), it was only used by the VPN and WiFi connection services to store private keys and certificates, and a public API was not available. ICS introduced a public API  and integrated the credential storage with the rest of the OS. However, while the underlying implementation is able to store arbitrary data owned by any app, the ICS API only allows us to store private…
Read more